What happens when your child needs expensive genetic testing?

When a child struggles with developmental challenges and comes to Mary Bridge Children’s Hospital to receive care, countless teams of doctors, specialists and top-tier resources are there waiting to help them. But what happens when treatment can’t occur, because the child’s condition can’t be determined?

“The unknown is the scariest part,” according to Katie Wright. She waited more than five years to learn that her daughter Ellie was born with a genetic mutation. Ellie has had low muscle tone and other developmental issues her entire life, leaving her unable to walk, talk or eat without assistance.

Brandon Stevens, 17, has also been searching for answers for the past six years. He suffers from severe stomach pains and periodic paralysis that attacks his arms and legs without warning. After 34 surgeries, doctors still aren’t sure of the cause behind his condition.

Thankfully, there is a special type of genetic test available for patients like Ellie and Brandon that can help them find answers. Exome sequencing is a comprehensive test that reads a patient’s DNA — 20,000+ genes, letter by letter — to detect any possible mutations. But it comes with a steep price tag.

Amy Yuen, MD, PhD, is a Mary Bridge pediatric genomics physician who says she sees too many patients hindered by the high expenses that come along with genetic testing.

“The problem is that sometimes a child’s insurance approves the cost of this testing, and sometimes it doesn’t,” she says. “If insurance doesn’t cover it, we can’t run the test and the child is left in a ‘freeze diagnostic odyssey.’”

For every DNA sample sent out for genetic testing, there can be up to a dozen others put on hold because of a family’s inability to pay. Most can’t afford the out-of-pocket cost that can reach up to $6,000 per test, so the child either waits until the funds can be raised or they never get tested at all.

Philanthropic donors of the Mary Bridge Children’s Foundation are putting an end to that freeze by establishing a fund that can be used specifically for patients in need of immediate genetic testing.

Ellie’s story: One of very few with her condition

For 7-year-old Ellie, it all started the moment she was born. The midwife who delivered her realized right away she wasn’t breathing, so Ellie was immediately given oxygen and monitored closely in the hours and days that followed. She wasn’t eating regularly, either. At her one-week check-up appointment, Katie’s midwife told her she thought there might be something wrong and suggested that Ellie be brought back the next day to meet with their geneticist. 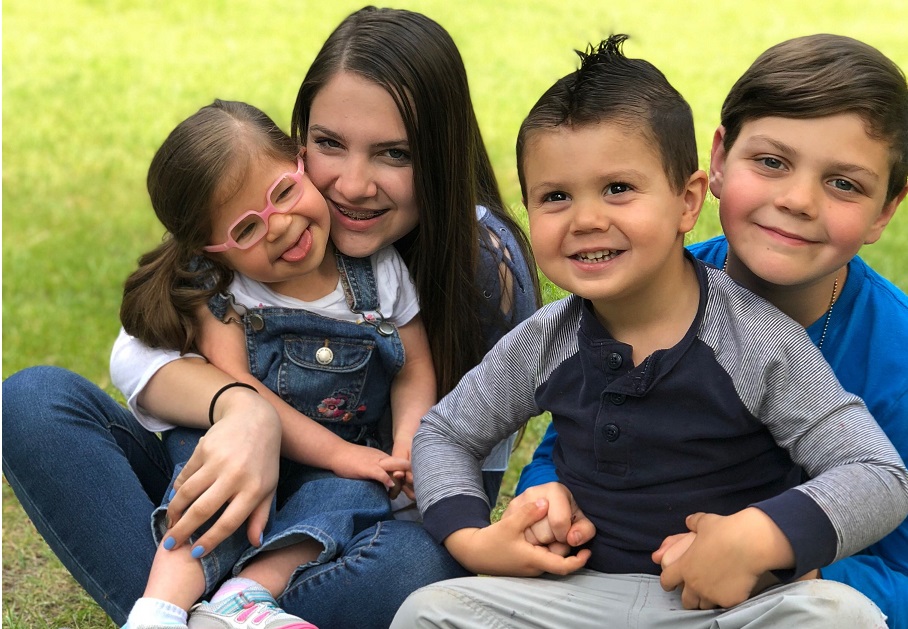 That’s when they met the doctor who “saved Ellie’s life over and over,” Katie says. It was Dr. Yuen — and she’s been in her life ever since.

“She was so sweet, soft-spoken, gentle and kind,” Katie recalls from their first appointment. Dr. Yuen suggested running an initial chromosomal analysis on Ellie that day, and it was the first of many tests that would come up with “negative” results for something abnormal in Ellie’s genetic makeup.

Despite those results, Katie knew in her heart that something was wrong. Ellie was still not eating regularly and was having trouble with mobility. At 9 months, she hadn’t even smiled yet. That was Katie’s first realization that something could be happening on a cognitive level — Ellie’s two older siblings had hit those milestones at much younger ages.

Katie didn’t give up on trying to find answers, and neither did Dr. Yuen. She recommended exome sequencing when Ellie was just over a year old, and Katie turned to crowdfunding to raise the money needed for the test. At that time, it was nearly $15,000.

The results took six months, and at first, they too came back negative. Understanding how devastating this was for Katie and the rest of Ellie’s family, Dr. Yuen continued to work with the external lab to retest the results in different ways for years. She also connected Katie with other genetic specialists, financial resources and even helped her apply and get accepted to The Undiagnosed Disease Program, a program at the National Institute of Health in Maryland with a very limited acceptance rate, focused on specialized care and research for rare medical cases.

The first sign of answers for Ellie didn’t come until she was 5 years old. Thanks to Dr. Yuen’s diligence to continue retesting Ellie’s exome sequencing, new results revealed that Ellie was born with mutation in her HUWE1 gene. She is one of only a couple dozen children worldwide with a mutation in this gene.

After years of waiting, countless hours of research and dozens of tests, Ellie finally had a starting point. She now attends school with kids her own age where she has daily physical, speech and occupational therapy —all of which have helped her become “a totally different kid,” her mom says.  She’s even learned how to communicate some of her basic needs through sign language.
“Getting those results, it means that we have direction,” Katie says. “We have somewhere to go from here. We can’t help her if we don’t know what’s going on.”

Brandon’s story: Dozens of surgeries, but still no answers

Bernadine and Rob Stevens are hoping to find similar answers for their son Brandon through the same type of testing Ellie received. 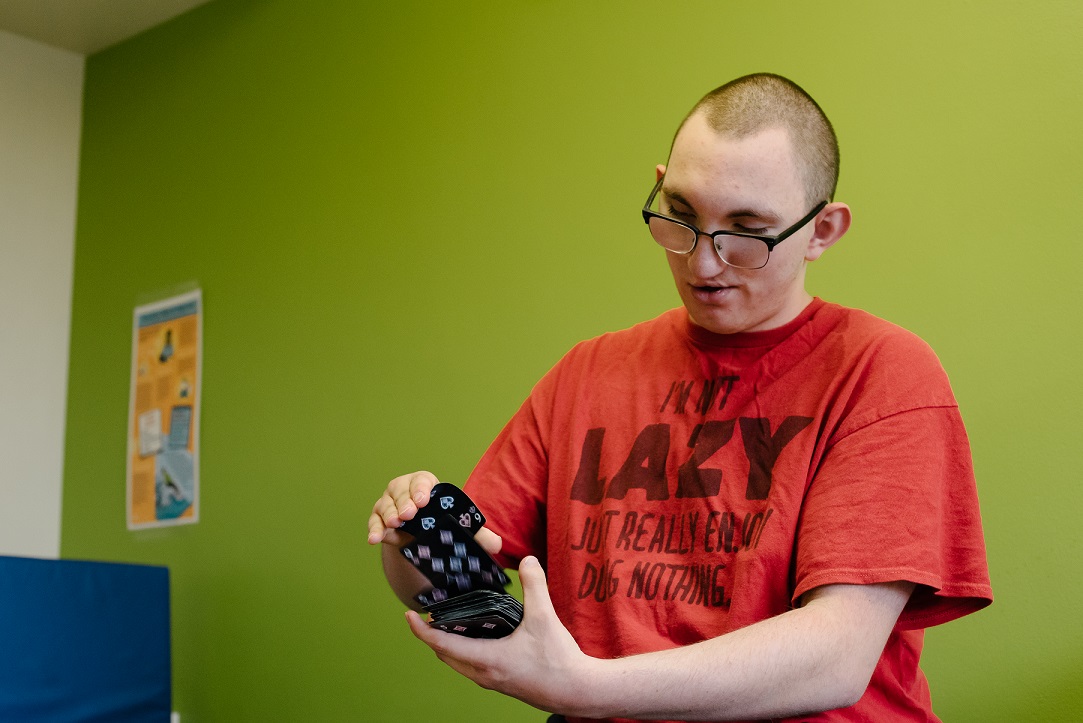 Brandon has been a Mary Bridge patient for the past five years, driving hours to each of his appointments from Selah to Tacoma. His family says the long drive is worth it for the level of care and determination they receive from Dr. Yuen and Michael Pickens, MD, a pediatric gastroenterologist.

“I’ve had lots of doctors, but hands down, Dr. Pickens is one of my favorites. He practically saved my life,” Brandon says. “He always talks to me and involves me in the decisions that are being made about me. I believe that he genuinely cares for me; I am not just another patient.”

One of his favorite things to do at appointments is show card tricks to his doctors. He knows dozens of them and spends his free time perfecting each one.

The first time Brandon visited Mary Bridge, he had an endoscopy. Dr. Pickens suggested that he change the type of feeding tube he was using. Brandon started to gain weight and feel better within six months, but was still experiencing episodes of paralysis.

“It starts out by affecting his arms and legs, and if allowed to continue, he loses the ability to talk or swallow,” Bernadine explains. “Of all the issues Brandon has, I think this one is the scariest.” 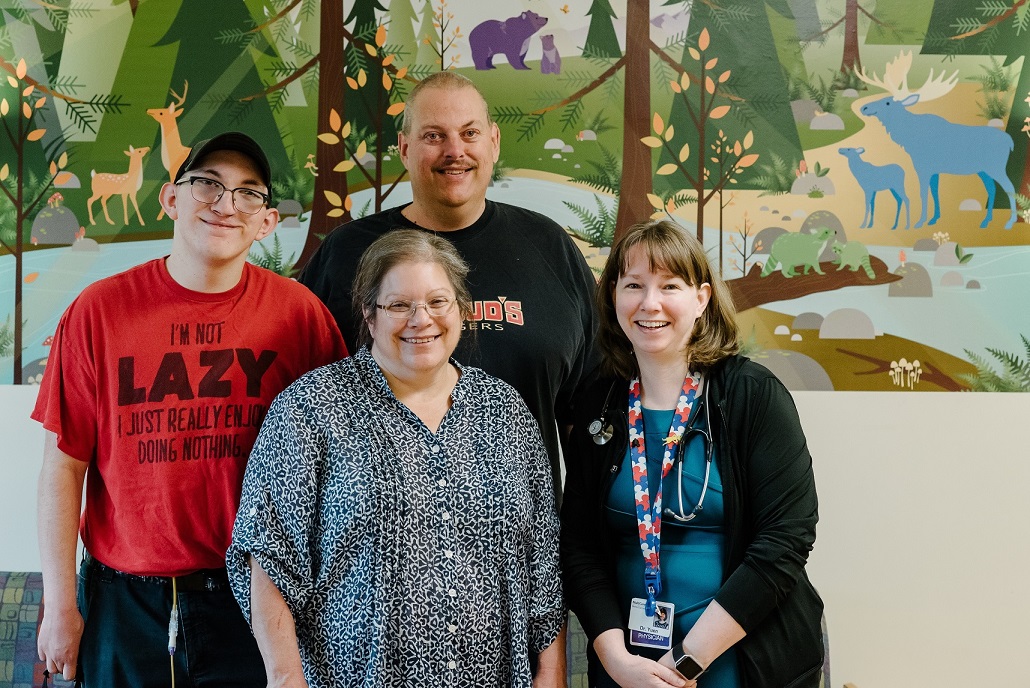 Like Ellie, Brandon was pointed to Dr. Yuen for help with genetic testing. He’s had multiple tests done already, all of which have come back negative for a cause behind his periodic paralysis. It hasn’t been an easy journey financially, given the high cost of the tests Brandon needs.

“We’ve had a hard time getting things approved — one test took a year and lots of paperwork. Having a coordinator from the insurance company can help, but you really have to fight them sometimes. It’s like a full-time job,” Bernadine says.

Bernadine is determined to help her son no matter what it takes, and this summer, Brandon will have his exome sequencing test done. His family is hopeful the results will help them finally uncover a cause for his condition, and so is his Mary Bridge team.

Because of stories like Ellie’s and Brandon's, the Mary Bridge Children’s Foundation has established a fund to help other patients with genetic conditions get the testing they need.