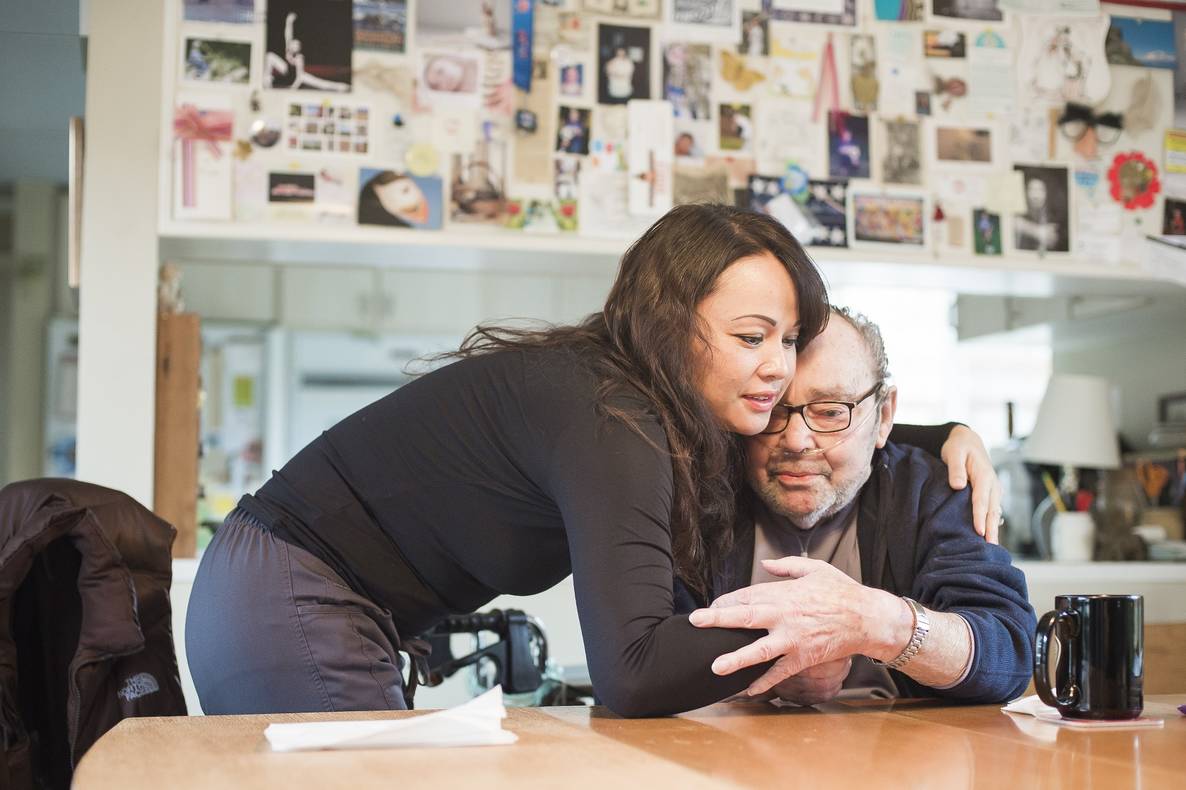 The night before Merle Siler passed away, his wife Nancy Colson and two daughters were by his side. They stayed up all night, taking turns to make sure he always had the right amount of medication to keep him from feeling any pain or discomfort from his severe chronic obstructive pulmonary disease (COPD).

His family knew exactly what to do to make him comfortable, with help from members of MultiCare at Home hospice services.

“The team of people we had from MultiCare — they made it bearable. The hospice team gave me great support in caring for him in his final weeks. It was the emotional safety net I needed.”

In December 2015, the deterioration of Merle’s lungs from COPD made it increasingly difficult for him to complete even the most basic daily tasks without getting short of breath, such as walking from one room to another or standing long enough to take a shower.

Getting out of the house required switching to a portable oxygen tank, eventually becoming more stress than his body could handle. That’s when Nancy contacted MultiCare at Home in Auburn to learn how they could help.

“We chose MultiCare because they were close to home,” Nancy says. “I couldn’t imagine driving long distances for all of the things we’d need to do to get him started.”

The Auburn hospice team helped Merle and Nancy determine that at-home care would be the best fit. Siler wanted to know his family would be surrounding him as he neared the end of his life.

When a patient begins at-home hospice care, a team of caregivers is assigned to support the patient and their family, making visits to the home once per week (or more if needed). A patient’s care team typically includes a case manager, home health nurse, physical and occupational therapists, a home aid and a dietitian.

Many of the at-home comfort therapies provided to hospice patients, such as acupuncture and massage, aren’t covered by insurance, so contributions from community donors are often used to cover the costs.

At the start of Merle's hospice journey, Nancy remembers being immediately surprised by the quality of the relationships he formed so quickly with his caretakers. They became his newest and closest friends.

“Those relationships can be just as nurturing as the therapies,” she says.

Tram Huynh, RN, was one of the first people to become part of Merle’s at-home team. As his home health nurse, she would assess his needs at each visit, monitor his vital signs, adjust his medications and — maybe most important — give him a reason to smile and laugh. Nancy recalls that Huynh’s presence put him at ease right away, from the very first time they met.

“The two of them had a special bond,” she says. “When he had to make the switch from home health care to hospice care, he didn’t want to let go of Tram.”

Nancy also remembers the kindness shown by her husband’s home health occupational therapist, John. At each visit, he’d ask Merle questions about his early career with Boeing, back when he worked on the assembly of the Saturn 5 rockets in New Orleans in the late 1960s.

“It did his heart good to have someone show an interest in that,” Nancy says. “He’d get so excited to tell John all about it, even though he hadn’t talked about it in years,” Nancy says.

The transition from preliminary home health care into hospice typically occurs when a patient is no longer responding to treatments. At that point, the care team’s focus remains on keeping the patient as comfortable as possible. A new care team of specialists with a different set of skills normally takes over for the patient’s home health team.

For Merle, that transition happened on Valentine’s Day 2016. Nancy remembers it well because they made a toast with their wedding glasses that night, trying to turn what could be a sad memory into a fun one.

Heath Nettles became Merle’s new hospice nurse, and he was happy to be able to keep the home aide he’d grown so close to — Keoni Eaken — throughout the transition. Nancy calls them a “blessing” for the level of attentiveness and compassion they showed.

“I would watch Heath go back to his car and input notes into his computer immediately after he left the house,” she says. “He could have done that when he was there talking to us, but he always waited until after so that he could be present when he was in our home. That’s one thing I noticed about everyone who took care of him — they never took their attention off of Merle.”

On St. Patrick’s Day 2016, just a month shy of his 80th birthday, Merle’s fight with COPD came to an end while he was surrounded by his closest family members. Heath came over that morning to help Nancy make arrangements for next steps, making sure to ask what kind of support she needed as she and her children began to plan for the funeral.

Even after Merle’s passing, his hospice team continued to show compassion and care for his wife. Nancy received a phone call the day before what would have been his birthday, asking if she had time for a visitor.

“She came walking up our driveway with two dozen yellow roses and orchids too — which she knew were my favorite,” Nancy remembers. “It was just the sweetest, most touching thing. I can’t say enough how grateful I was for that support.”

In 2017, 1,641 patients were cared for by MultiCare at Home hospice services. MultiCare provided $639,000 in uncompensated care.

Donor contributions play a crucial role for the families of hospice patients by covering the costs of uncompensated care, comfort therapies, bereavement support and more.