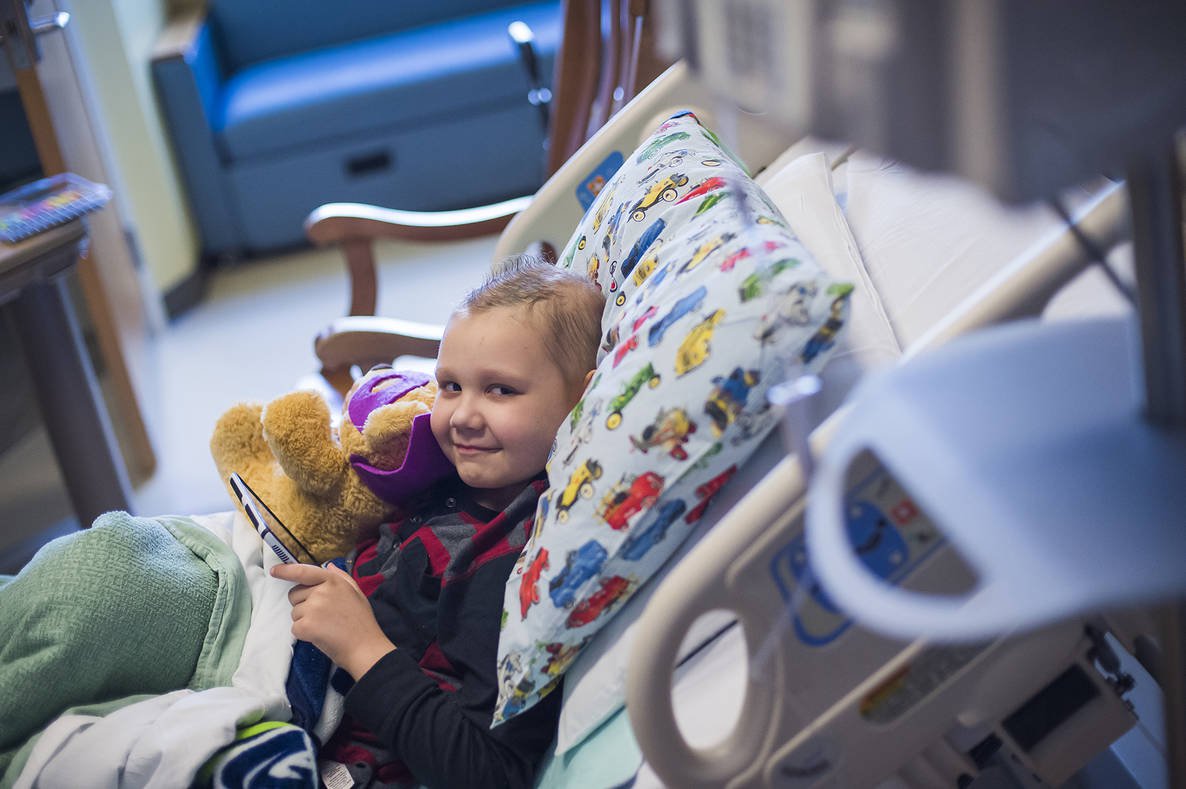 As the IV drips, he quietly sings, “Superman’s got nothing on me,” a line from one of his favorite Charlie Puth songs.

Dawsin is winning his battle with a rare, aggressive form of cancer known as T cell acute lymphoblastic leukemia (ETP T-ALL). For the past two years, he and his family have faced the unimaginable.

During what would have been his kindergarten school year, Dawsin spent 98 days at Mary Bridge Children’s Hospital, much of that time in isolation. He’s had three surgeries. He was put into an induced coma. He lost his hair — twice. He couldn’t eat solid food for months. He was bedridden and lost the ability to walk.

“He writes his own book. Nothing ever goes the way it’s supposed to with Dawsin,” his mom, Shawna Dailey, explains.

In May 2016, Dawsin fell and injured his knee. He couldn’t walk, but X-rays were clear. Dailey knew something was wrong, and took him to the doctor three days in a row. Finally, they did a blood draw.
Dailey got a call from Dawsin’s pediatrician the next day. She could hear him crying as he told her, “You’ve got to go to Mary Bridge right now. He has cancer.”

Pediatric oncologist Tamara Chang, MD, met Dawsin and his family at Mary Bridge, where he immediately started chemotherapy. Everything was going according to plan and protocol until he contracted typhlitis: a rare and dangerous disease in his intestines caused by the chemotherapy. He underwent emergency surgery to remove eight inches of his colon and two subsequent surgeries to help his body heal.

On day 29 of his stay at Mary Bridge, Dawsin and his family were thrilled to learn that he was cancer-free. But their journey was far from over.

Dawsin continued to have complicated reactions to treatment. The Mary Bridge rapid response team rushed to his room on three separate occasions to stabilize his vital signs: once when he vomited blood, once when he had a seizure and once when he had a severe allergic reaction to the chemo.
Dailey was there at every turn. She stopped working for 14 months to stay by her son’s side. She held his right hand every night in the hospital as he slept.

“I felt pain I didn’t know existed,” Dailey says. “What gave me courage and strength was taking this experience one day at a time and seeing him slowly get better. I kept telling myself, ‘This is not it.’”

Dawsin remained bedridden and in isolation for most of his stay at Mary Bridge as he healed from the surgeries and received ongoing chemo.

The Mary Bridge Child Life Services team came to his rescue. The team of child life specialists helps minimize stress and anxiety for children and families during hospital stays and clinic visits.

When Dawsin started losing his hair, Child Life Specialist Katie Schenk came to his room to be by his side and shave the rest of it off.

While Dawsin was unable to eat solid food, the team covered an entire wall in his room with lists of foods he planned to eat when he left the hospital. Whenever possible, they found ways to get him out of his room.

“They would let us go outside to the fountain for a few minutes at a time, just so we could make our wishes,” Dailey says.

Because Dawsin was bedridden for such a long tim and lost so much muscle in his legs, he couldn’t walk and had to use a wheelchair. Physical therapist Cindy Finel got him moving again. She started by simply playing catch with Dawsin while he was in bed. Eventually, he was able to walk with the help of orthotics. Today, he’s finally walking without support.

Mary Bridge head nurse Jodi Gragg, RN, also played a special role in Dawsin’s care and healing. She let Dawsin test drive a high-tech patient bed. Gragg also arranged for him to throw the first pitch at a Tacoma Rainiers game when he was well enough. She even served as a calm sounding board for Dailey.

Even though the circumstances were devastating, Dailey describes their Mary Bridge stay as amazing.

“Everyone at Mary Bridge made us feel like Dawsin was their only patient,” Dailey explains.
Back at the hematology/oncology clinic, Dawsin’s face lights up as he catches a glimpse of Dr. Chang and Bishop.

“The people here make me feel brave,” he says.

Dawsin will continue to receive chemo every day at home and once per month at Mary Bridge until October 19, 2019, his last day of treatment. With an end date on the books, Dailey marvels at how far Dawsin has come.

“It’s amazing how he’s bounced back from this, emotionally,” she says. “Before all of this, when we would go to an amusement park, he was terrified to go on the smallest kiddie rides. Now he’ll ride the biggest, scariest rollercoasters.”

Superman’s got nothing on the Awesome Dawsin.

This summer, Dawsin will be motivating cyclists as the patient champion for the Fat Tire Ride & Run at Mary Bridge Children’s Courage. Courage is a weekend cycling and camping adventure that benefits Mary Bridge patients like Dawsin.

To register for Courage and pedal for kids like Dawsin, visit ridewithcourage.org.