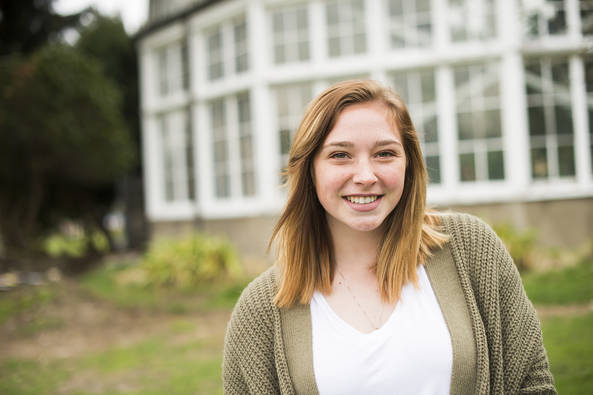 A few months later, she tried to take her own life.

Lizzie’s rapid decline was triggered by a tragic accident.

Lizzie looked up to a friend named Haley. A few years older than Lizzie, Haley was a straight ‘A’ student who received a full scholarship to Harvard. She was an important, positive influence on Lizzie.

“I’m a single mom and it was important for Lizzie to have a role model like Haley,” Lizzie’s mom, Dawn, explains.

Haley was traveling through Europe the spring before entering her sophomore year at Harvard. Haley never came back from her trip. In Germany, she had slipped, fallen into a waterfall and drowned.

Lizzie was in shock.

“She started to spiral downward after that,” says Dawn.

The once happy, strong-willed, social Lizzie became a shell of her former self.

On the morning of March 16, Dawn couldn’t find her hairbrush and knocked on Lizzie’s bathroom door, knowing her daughter had plenty to spare.

“I don’t have one,” Lizzie responded.

Dawn knew something was wrong.

She pushed opened the door to find her daughter on the floor, surrounded by razor blades and pills, arms cut and bleeding. With her 11-year old daughter, Bella, sleeping in the other room, Dawn acted fast — she called 911 and instructed the ambulance to take Lizzie to Mary Bridge Children’s Hospital.

This was years before MultiCare had an inpatient behavioral health unit for teens, so Dawn knew Lizzie would have to be sent somewhere else for mental health care once the staff at Mary Bridge had addressed the immediate physical concerns.

Dawn recalls, “I remember telling anyone who would listen that she can’t come home. I needed help.”

Lizzie told the medical staff that she couldn’t keep herself safe, so she was sent to an inpatient facility in King County for treatment. She was extraordinarily lucky to get a bed that night. At the time, there were only four units in the entire state specializing in adolescent behavioral health care.

The need for healing spaces for teens

An estimated one in five teens between the ages of 13 and 18 live with a behavioral health issue. Half of all teens with serious behavioral health illness will drop out of school, a result of inadequate care. Suicide is the second leading cause of death in youth ages 10–24.

When Lizzie experienced a crisis in 2014, there was no specialized care unit for teens in Pierce County. She was compelled to seek help outside of her community and outside of her network of care.

Dawn had to drive back and forth from her home in Eatonville to the Seattle area to visit Lizzie every day for 17 days.

Lizzie describes the environment she experienced as hostile, saying, “It felt like a prison.”

She saw other teens held in straightjackets and restraints. None of the kids were allowed to touch or hug one another. She felt like she wasn’t heard by any of the caregivers.

“They were asking me to repeat my story over and over again. They weren’t taking the time to get to know me or even read the notes in my chart,” Lizzie explains.

Once Lizzie returned home, there wasn’t much follow-up care. Lizzie ended up returning to that same inpatient unit for a separate stay before she finally started to improve. Dawn felt like she lacked the resources and support from the medical community to care for her child.

“I think having a child going through a behavioral health crisis is like any other physical disease. Even cancer. She didn’t ask to be sick. I didn’t ask her to be sick. We need to treat the whole child along with their family. We need parent support groups and resources like those available to children with illnesses you can see,” Dawn says.

Fortunately, MultiCare is now leading the way in building these resources for teens and their families.

The new 27-bed hospital-based unit was designed to be a contemporary, inviting space with private rooms and open social areas, while also including state-of-the-art safety features to protect patients and staff.

The facility is designed so that teens can be treated without the use of restraints; the sensory room is a safe and secure way for patients to relieve stress and anxiety. Yoga and other classes are taught in the activity center.

Dawn had a chance to tour the facility when it first opened.

“When I walked through, I almost cried,” she says.

It doesn’t have the sterile, institutional look and feel that we associate with mental health wards. Instead, the progressive treatment facility provides a safe, therapeutic environment filled with natural light, warm colors, and lots of comfortable nooks and quiet spaces for relaxation and healing.

The collaborative team of pediatric and mental health experts provides care and treatment for teens facing a range of mental health issues, including major depression, anxiety disorders, psychosis, schizophrenia and bipolar disorder. The goal is to create treatment plans tailored to each teen's needs, based on their diagnosis, background and triggers.

Once teens are ready to leave the unit, the care team works with family and outpatient providers to ensure there is a safety plan in place. Parents and teens are educated about the treatment that was provided during the inpatient stay and taught how to continue to use the skills and tools that they developed. Follow-up appointments with outpatient providers are scheduled prior to discharge.

It is an incredible, lifesaving resource for teens who are suffering a mental health crisis — and their families. The unit has helped more than 150 teens since it opened in November 2016.

A healthy future for Lizzie

After Lizzie returned home from her second stay at the facility and started improving, she became a role model at her high school by sharing her experience. Subsequently, 15 percent of the student population sought some form of mental health care.

Nearly two years later, Lizzie is doing well. She’s a freshman in college and plays on the fast-pitch softball team. She’s a leader on her church’s worship team and surrounds herself with people who want to see her succeed.

She also serves as a mentor for kids and is an advocate for improving mental health care for teens.

“If you are a teen going through a crisis, ask for help. Keep working at it. You can’t be better at a sport without practice. And you can’t expect to just get better right away. You have to work at it,” Lizzie advises.

For parents with a child going through a behavioral health crisis, Dawn wants them to know that they are not alone.

“Just keep working until you get the help you need.”