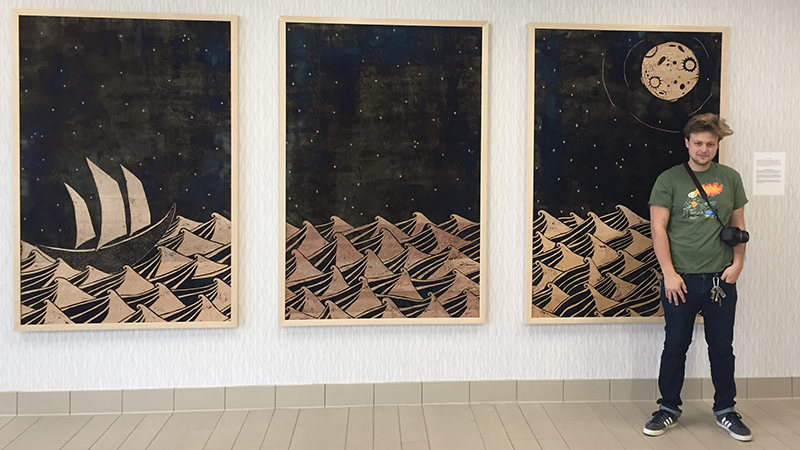 There’s a stunning piece of artwork that hangs in the entryway of Wellfound Behavioral Health Hospital. It’s impossible to miss; not just because of its sheer size, but because of what it represents.

The piece is 14 feet long, laid out in three woodcut panels. Next to it, there will soon be a plaque with a message from the artist. Part of it will read: 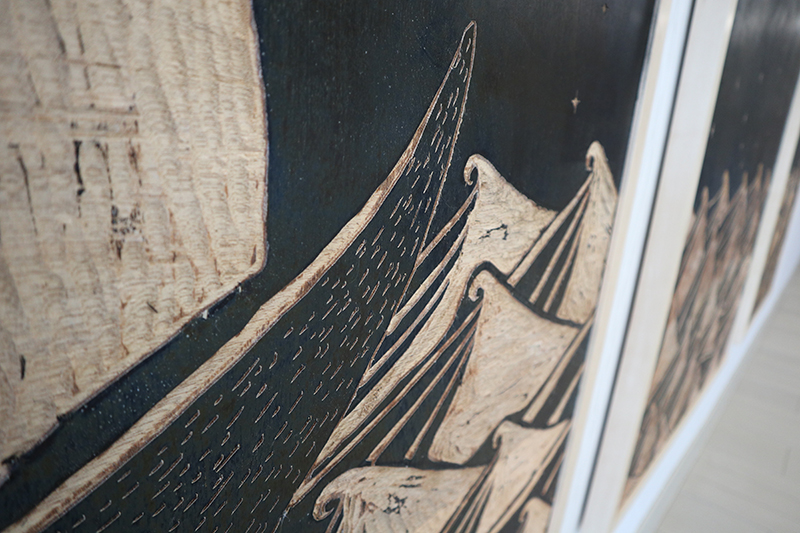 “Being adrift among a sea of emotions is a lonely and drowning feeling, often with the feeling of no end in sight. This piece shows a boat as a safe place to navigate the darkness, and the moon represents the fact that there is light. No matter how far away it may seem, there is always light.”

These words belong to Peter Jacobsen. At just 19 years old, he’s already made a name for himself as a talented Tacoma artist. He’s designed and sold dozens of pieces made out of wood, glass, metal, paint and more — but this one was different. It’s displayed in a place that was built to help others heal, and over the countless hours Peter poured into bringing it to life, he went through a healing process of his own.

Art is a form of expression for Peter. Sometimes, it’s also a form of therapy. He’s struggled with depression since he was in middle school. That’s why there was no question in his mind when he was approached in August 2018 about creating an original piece that would be displayed in Wellfound.

“When I heard it was going to go in a hospital for people struggling with mental illness, it really had a different kind of impact on me,” Peter explains. “I was 12 when I started having suicidal thoughts. I was going to therapy and doing other things to help me through it, but I found the only thing that really helped me feel at peace was my art.”

The construction of Wellfound was made possible through a partnership between MultiCare and CHI Franciscan, as well as support from community donors. The 120-bed hospital was built to address the overwhelming need for more inpatient psychiatric services in Pierce County.

John Thoennes, associate project manager for Wellfound, was tasked with leading the art direction for the building.

“The goal of the art program wasn’t just to find art,” John explains. “It was to develop community relationships within the City of Tacoma and to bring local artists in on what we were doing.”

After seeing photos of Peter’s work, John contacted him to ask if he’d be willing to create an original piece for the hospital.

“When my parents tried to hospitalize me after I had an incident in the past, there weren’t any hospitals nearby that had room for someone like me. I just went to the regular ER instead,” Peter says. “There’s not enough places like Wellfound for people who need them, and there’s still a stigma around depression. But with Wellfound, it was really cool to see so many people who were stepping in with their own resources to make future generations more accepting of mental illness. I was happy to help and be part of it, however I could.”

John felt that it would be important for Peter to see the space where his art would be displayed. He brought Peter to the Wellfound construction site to show him around, and it was during that tour when he first learned about Peter’s personal connection to behavioral health.

“Peter said to me, ‘I want to let you know that I suffer from depression. I’ve had a difficult time, I’ve been there and I know what it is that you’re trying to do. I really want to be part of this,’” John recalls. He and Peter then walked to the lobby’s entryway.

“I said, ‘Peter, this is the wall for you,’” John remembers. “Looking back on it now, that was a really bold thing to do because I didn’t really know exactly what he would produce. But I just knew I had to give him that main lobby. It was a gut feeling.”

Peter dedicated the next six months of his time to carving, sculpting and sealing the piece that he fittingly named “Onward.” By the time he showed John a photo of his finished creation, it was already inked almost entirely in black.

John was taken aback, at first.

“He was concerned about seeing so much black because black is perceived as a depressing color,” Peter remembers. “But I told John, that’s the point — it’s black on purpose. It’s meant to acknowledge the darkness and the sadness that’s there when you’re depressed, but to also show that there’s a light in the distance that can help you overcome it. As dark as it may seem sometimes, if you stay your course, you’ll eventually find that light. You just have to know where to look.”

Since it was installed, “Onward” has already made an impact on people who have visited Wellfound. Peter knows this because many of them have contacted him directly to tell him. Some have even requested to meet him, to share how much it resonated with them.

“This has been one of the most meaningful pieces I’ve ever done because of my own connection to it,” Peter says. “I’m grateful to have been part of this, and excited to be able to share what it meant to me with any patient who might be going through what I did. I feel like I’ll always have that connection with them now. If my message can help even one person, that makes it all worth it for me.”

One in five adults will experience a behavioral health issue at some point in their lifetime. You can bring hope, healing and recovery to people in your community by making a donation to Wellfound Behavioral Health Hospital.